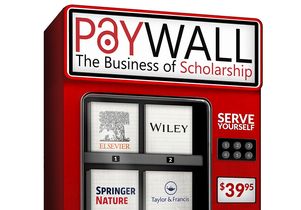 The documentary features more than 70 interviews to high-ranking scientists, librarians, publishers and open access advocates from all over the world – including Alexandra Elbakyan, the controversial funder of Sci-Hub (a pirate platform offering illegal access to millions of academic articles).

The film provides a persuasive portrayal of the problems affecting the scholarly publishing industry, such as unfair pricing, lack of competition and disparity of access between wealthy countries and the global south. As argued in the film, the cost of academic journal subscriptions has increased dramatically over the last decades (way above the inflation rate) – resulting in companies like Elsevier reaching profit margins that rival those of the most successful tech companies in the world. While the large majority of scientific publications are hidden behind paywalls, most of scientific research is being funded by taxpayer money – which ultimately means that society is not benefitting in full from the research it pays for.

To solve these issues and ensure transparency and equality in scientific dissemination, the film endorses the idea of universal open access to academic literature – a model whereby publications are freely available online at no cost to the reader.

One partial limitation of the film is that it fails to adequately address the challenges posed by the open access business model, such as the existence of predatory journals and the fact that legacy publishers have penetrated the open access market and are contributing to drive the cost of open access publication significantly up.

While the issues debated in the documentary are more or less well known within the academic community, the film provides a compelling and eye-opening overview of the state of affairs within the scientific publishing industry for beginners viewers and for the general public.